How to Escape the Rear Naked Choke By Your Couch 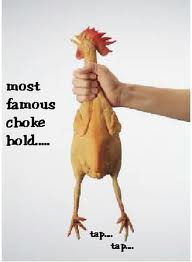 After working long hours, I love to do nothing but couch.  This laziness is in direct conflict with my ambition to learn BJJ.  After a stint of falling off the wagon (i.e., the mat), how do you get back on the horse and get going with BJJ class again?  The answer is "with much regret."  After missing a series of classes, I always kick myself for not fiting in at least 1 class per week (I travel frequently which is the other reason besides laziness (Master Dave...you should only read that work is the cause of any of my absences)).  As an Aged and Feeble BJJ Practitioner, missing just a week puts my cardio back two weeks or more.  Nothing sucks more than gassing.  Well, maybe getting choked when you are gassing out.  So, How to Escape the Rear Naked Choke...From Your Couch?   Answer: don't let the couch get its hooks in.  Go to at least one class per week.  Take your Gi on business trips and find a nearby BJJ club.  I did this once in Lexington KY and it was fun.  As an aged and feeble student, you will be a novelty.  Every BJJ Club probably wants their own token old man...to pummel, choke and cherish.
Posted by Test at 9:07 PM No comments:

I was intimidated to take the Judo classes at Rage Fight Club in Manassas.  Just doing BJJ warm ups, I ended up getting surgery by only break falling poorly....duh.  What would the aged and feeble OMJJ novice get into with a full program of  break falling?  Nonetheless, I knew that I needed to learn how to break fall the correct way and I always loved the Ippon Seio Nage/Japanese Whizzer/Shoulder Throw from high school wrestling.

The Judo class is taught by two black belts: 1st and 3rd dan, Victor and Jay.  It is really amazing to have two sensai of that caliber teaching a class attended by a small group of students.  My hesitations were somewhat unwarranted.  I am learning how to do some basics, including break falling.  The sparring still has me cautious, as I am not really used to the part of getting thrown.  I really enjoy the art aspect of Judo.  The end of class Victor does this meditational breathing routine.  It is more formal with the bowing and the like but still very casual and non-militaristic.  Judo is very fun.  It is awe-inspiring to watch and "play" as the throws are more dramatic and exciting than BJJ's ground game.  However, it is more restricted given that Judo disallows leg take downs, which with a wrestling background is my standup game.   If I could even call it a "game," at this point.;
Posted by Test at 7:18 PM No comments:

Injuries vs. To-be-expected Aches and Pains


Aches and pains are to be expected when you are an aged and feeble BJJ student.  Unfortunately, injuries are also to be expected.  Since I started, I have had a rotator cuff sprain, elbow bone spur, elbow bursitis, popped rib, torn shoulder cartilidge, and arthritis in both shoulders.  These injuries and the elbow surgery have had me out about half of the year that I have been training.  I have learned how to protect myself and be smarter at training.  Here are my lessons learned:

1. get very warmed up.  Don't spar until you are loose and ready.

2. Follow the technique with no short cuts.  I screwed up my elbow by being lazy when break falling.

3. Be defensive and avoid being submitted.  Subs are brutal on the joints.

4. Tap as soon as you are caught.  There is no sense in straining your joints when you are already done for.

5. Give your joints a break.  When my arthritis starts to ache endlessly, I will take a break from class or spare for a shorter time.  Your younger team mates will not understand, but if you are in it for the long haul, be prepared to take extra time.

The term Political Jiu Jitsu or Political JuJitsu is a new one to me.  I heard it on a news show referring to the act of taking one's strength and twisting it to seem like its their weakness.  An acadwmic seacribed it as "The ability of weak actors to exploit the frequent contradictions that arise-particularly in advanced liberal democracies-between normative commitments and material interests."  Huh...uh...ok...  The origins of the use of this term is unknown, but it is something that appeared in the 2008 presidential race.

This post did better research on the term (http://warhistorian.org/wordpress/?p=685): "In his classic study, The Power of Nononviolence (1934), Richard B. Gregg coined the term “moral jiu jitsu” to describe the principles undergirding Gandhi’s satyagraha as he had seen them operate in India.  Martin Luther King, Jr. considered Gregg’s book one of five that most profoundly shaped his thought, and wrote the foreword to an edition published in 1960. (An abridged version of that edition is here.)  Gregg argued that the use of physical violence by groups that seek to challenge a repressive order legitimizes a violent response by that order, and since that order usually has a far greater capacity for violent force, this is a losing strategy.  A refusal to use violence, on the other, causes the repressive order to lose moral balance, in the same way that jiu jitsu causes an attacker to lose physical balance.

In 1973, political scientist Gene Sharp, termed by one commentator “the Clausewitz of nonviolent warfare,” published The Politics of Nonviolent Action.  In it, he dropped “moral jiu jitsu” in favor of “political jiu-jitsu,” a phrase intended to encompass tactics that went beyond Gregg’s emphasis on the psychological effect of nonviolent resistance.  The metaphor informs the entire book, and a key chapter is entitled “Political Jiu-Jitsu.”  Its first paragraph defines the term: