I went back to my alma mater, Blair Academy, for my 25th reunion.  I wrestled at the school starting in 1981, which they have had a run on being national champions in prep schools for 30 years.  Blair is widely regarded as the best high school wrestling team in the country, for which I had little to deal with.  The Assistant coach during my last years, Jeff Buxton, is still there leading the team...truly amazing accomplishments.  Coaches Hutchinson and Latessa have since moved on, but they were also amazing at building the program in its early stages.

Adam Frey ’05 and Ryan McGrath ’98 were accomplished wrestlers at Blair who died from cancer at young ages.  Cage Fighter created a fundraiser Tshirt, which proceeds from the sale of the shirt go towards the Foundation in Memory of Adam Frey and Ryan McGrath.

Buy the Tshirt at
https://www1.blair.edu/store/index2.cfm

"The Adam Frey Foundation is a non-profit organization formed by Adam Frey to give comfort to and provide enjoyment for those receiving treatment for cancer.

During an aggressive bout of chemo, about a month before Adam passed away, he wrote in his blog, “Hopefully life outside of chemo and the sickness will be comfortable.” The purpose of The Adam Frey Foundation is to make this hope come true for people fighting cancer.

When Adam was undergoing cancer treatments, he would visit with the other patients in the hospital. It did not matter to him if someone was nine or 90; he was going to engage them in conversation, and it was these conversations that enabled him to see a real need.

He started with bringing a hot lunch every third Wednesday to the Hillman Treatment Center in Pittsburgh. Then when Adam started going to Sloan Kettering in New York for treatments, he asked, “Mom, can you make dinner for the whole floor. Mom, when you order the groceries, get this type of Gatorade for this person and this cookie for that person.” He even planned a turkey dinner one day and invited people as he walked down the hall. Adam had the means to help, and he did, no matter what he had to do. It was at this time that he decided that when he left New York, he was going to start a foundation that would help people get the food they needed, gas monies to get back and forth from the doctor’s, air fare, and other necessities needed for life with cancer. His mindset is that millions of dollars are allocated to the research of cancer, but very little goes into funds that can be used for something other than needles and pins; something that can put a smile on their face.

As of today, The Adam Frey Foundation is the leading contributor to the Hillman patient assistant program where gifts cards are provided in $100 amounts to be used for food, gas, or prescriptions. We have also organized an event for Easter where the Easter Bunny will be providing treats to the children, and gift cards to the parents at the Children’s Hospital Cancer Ward in Pittsburgh. Also, we are in the process of speaking with The Hope Lodge, and Sloan Kettering, both in New York City.

As The Foundation grows, the amount of those who we can help will also grow. Adam was very passionate about this work, and it is through this Foundation that not only his love of life and compassion for people can continue to spread, but his fighting spirit will also live on."
Posted by Test at 8:51 PM No comments: 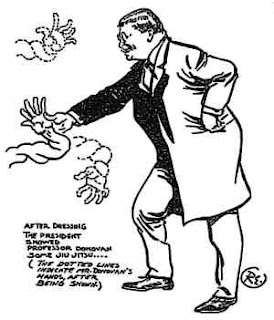 Old Age and Martial Arts: Age and treachery will triumph over youth and skill

Kung Fu, TKD, and Karate never really sparked my interest, but this pic is  still funny (from tvtropes.org):
"Never act incautiously when confronted by a little bald wrinkly smiling man!"
— Rule One, according to Lu-Tze, from Terry Pratchett's Discworld
"Age and treachery will triumph over youth and skill."
— Fencer's Adage
"Boot to the head."
— Old Master, The Frantics' Tae Kwon Leep 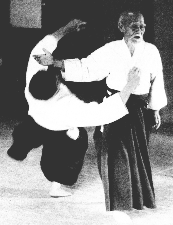 Links about the history of Brazilian Jiu Jitsu.  This post is updated as I come across new information.

Review of book, Carlos Gracie: The Creator of a Dynasty, published in Brazil.

Helio Gracie
Posted by Test at 8:29 AM No comments:

Jiu Jitsu for Kids is Professor Carlos Rollyson (7th Degree Black Belt in Brazilian Jiu-Jitsu) in a cartoon with sparing teddy bears and teaching the ippon seoi nage to an alien. The move is shown in 4 angles and is actually sort of technical, you could say. At first, you are not sure what you are watching: a SNL-like parody skit about BJJ or a genuine kids cartoon.   Its amusing...for a few minutes.  Very creative and well done.