A more serious blog for once...

It doesn't really matter that I am not the ripe age for a BJJ noob.  I may never be the greatest at it, but BJJ provides an experience that is very much needed in my life at this age and most other ages.  Here is my list of reasons for thanks, not in any order:
Here would be a list of things that I hate about BJJ, but that list would be obvious to anyone that loves the sport.  BJJ is complicated, difficult and sucks in so many ways that make it a great experience in life.

Team Dave Trader JJ had 3 competitors at the IBJJF New York Open, which all won medals.

Michelle Welti with a silver and bronze in blue belt adult.  She looked really good and dominated except for one nemesis opponent.

Arturo Ayala with a bronze in a tough white belt weight class.  His second opponent wins the tournament's Douche Bag Award by showing up at the podium and saying that he was Arturo and taking his medal.  The the IBJJF did the right thing and gave Arturo another medal.  Can you believe/tolerate that there are such people out there in our sport?

I was very fortunate to win my one match and a gold medal in the white belt senior.
Posted by Test at 8:50 AM 1 comment: 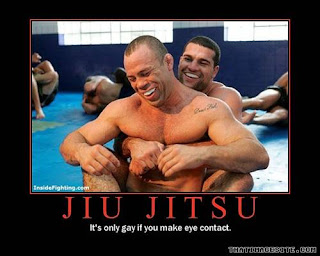 I sweat so much that I have started to keep a sweat rag with me throughout class.  I keep it tucked into my belt like a football referee.  As my days are numbered as a BJJ practitioner, my sweat rag is well-positioned as a new technique for myself as a BJJ referee....  The flag flies and I bark, "illegal toe lock, advantage red, resume from the guard position." But, the sweat rag flag falls on the face of an innocent wife by-stander at mat-side and I am once again, the pariah of all that is disgusting in BJJ.
Posted by Test at 11:06 PM 3 comments:

Circumsizing the Fat from the Old Man

I wish it was as easy as a religious-based torture to deform defenseless babies where they are most vulnerable.  However, I am finding rapid weight loss at age 43 to be impossible.  I am planning to enter the IBJJF New York Open on April 16.  I started with much fat hovering around 243-246 pounds.  I have been on a strict diet for 3 weeks and now hover around 239-241 pounds.  I need to get down to about 218 to make the 221 class with gi.  In my wrestling days of yesteryear, I could drop 10 pounds by just starting to diet and I had much less fat then.  Now, however, the fat sticks to me better than gum under a counter.  My diet consists of a berry walnut greek yogurt protein powder almond milk smoothie in the morning, which can tend to look like pink/orange chunky baby poo, if strawberries are used and the nuts are not blended fully.  Then, meat, greens, almonds, cottage cheese for the rest of the day.  That's it.

I need a tape worm.  The dieters friend.  Fourteen years ago, I was on Koh Lipe, before it had many tourists and had few boats to the mainland.  I was filtering water from an old mini filter and got tape worm.  I knew it was tapeworm for two reasons.  One, you could see it in your #2s.  Secondly, I understood why my dog would scoot across the floor to scratch its anus.  Yes, it itched like a mother ..........  It turns out that tape worms used to be used as a weight loss treatment back in the days of snake oil.  I lost 20 pounds in three weeks on the island (down to 185).  Just for kicks, after I got back on the mainland, I decided to test my parasitic pet, before I killed it with medicinal poison.  I ate a whole pizza one evening.  Stuffed myself to the gills.  The next morning.  Zero weight gain.  My wormy ate it all up. 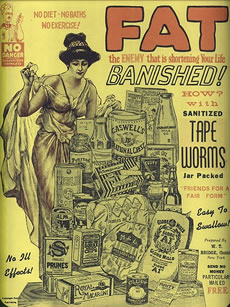 I am getting desperate with my diet.  Its time to blame it on my age.  I decided to do some Internet research to find some tips on losing weight for the aged.  Here is what Life Mojo said (and my comments):
It turns out that medical research shows that "weight loss in old age may signal dementia."  Good.  That means that I am NOT losing weight AND, thus, I am NOT losing my mind.  Yeah.  This weight loss problem is a good sign.

If need be, I will just enter in the ultra heavy weight "pesadissimo" division and contend with my other fellow walruses. 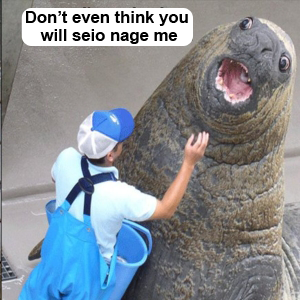 Daintiest Big Man and Past Gas

I guess that I realize now that I am not just old, I am also a wuss.   400 lb Josh labelled me with, "you are the daintiest big man I have ever rolled with."  To my defense, his comment followed after he flopped on me going into side control.   The reason for his comment is that I make a lot of sound effects.  So much so that I have created a new language:
Actually, last Saturday Andrew was sparring with another and asked mockingly if I was alright.  I said, "you can hear that (panting)."  Sparring partner Josh answered, "the jiu jitsu school in Gainesville can hear you."  Gainesville being 6 miles away.

"How long does it take to get past gassing terribly (when you are old and feeble)?"  I was wondering that myself, as I was having a lot of trouble getting back going after not taking many BJJ classes at the end of last year.  I remember Master Dave saying it takes a week or two.  For the Aged, it took about 5 weeks and I am just starting to feel good with sparring, not yet able to go 100% for 15 minutes.  When I started, it took 3 months.  But, then again, I am the Daintiest Big Man.
Posted by Test at 4:41 PM 2 comments: